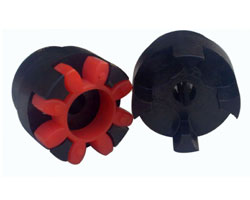 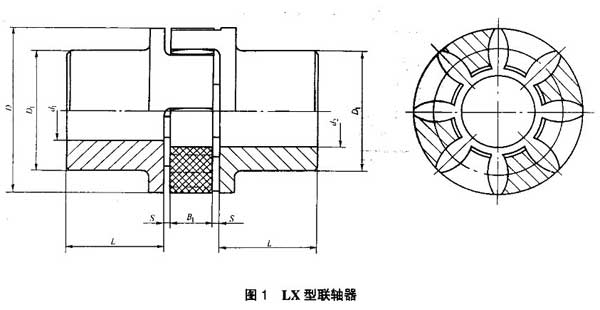 The LX (formerly XL) basic star-shaped elastic coupling uses an integral star-shaped elastic ring as an elastic element, which is installed between the convex claw blocks of two half-couplings of the same shape to realize the coupling of the two halves. The connection of the shaft.
Features of star elastic coupling:
1. It has certain compensation for the relative offset of the two axes, damping and cushioning performance.
2. Small radial size, simple structure, no lubrication, high carrying capacity, and easy maintenance.
3. It is suitable for connecting two coaxial lines, frequent starting, and changeable forward and reverse rotation. The transmission torque is 20-25000N.m, and the working temperature is -35-80℃.
4. The polyurethane elastomer is limited by the convex claw block, which can avoid the internal deformation caused by impact and the external deformation caused by centrifugal force; the large concave surface of the convex claw makes the surface pressure on the involute tooth very small, even on the tooth. Withstand overload, the teeth will not wear or deform.
5. The standard number is JB/T 10466-2004, which stipulates eight structural forms of the star coupling, which expands the scope of application.
The structure of the coupling is basically the same as that of the quincunx-shaped elastic coupling. The difference lies in the shape of the elastic elements, which are star-shaped and quincunx-shaped. The performance is the same as that of the quincunx-shaped elastic coupling.
Basic parameters and main dimensions of LX (formerly XL) basic star elastic coupling (JB/T 10466-2004) (Unit: mm)